You are here: Home / Bob Fabien Zinga / Program helps students learn how to say “no” to drugs 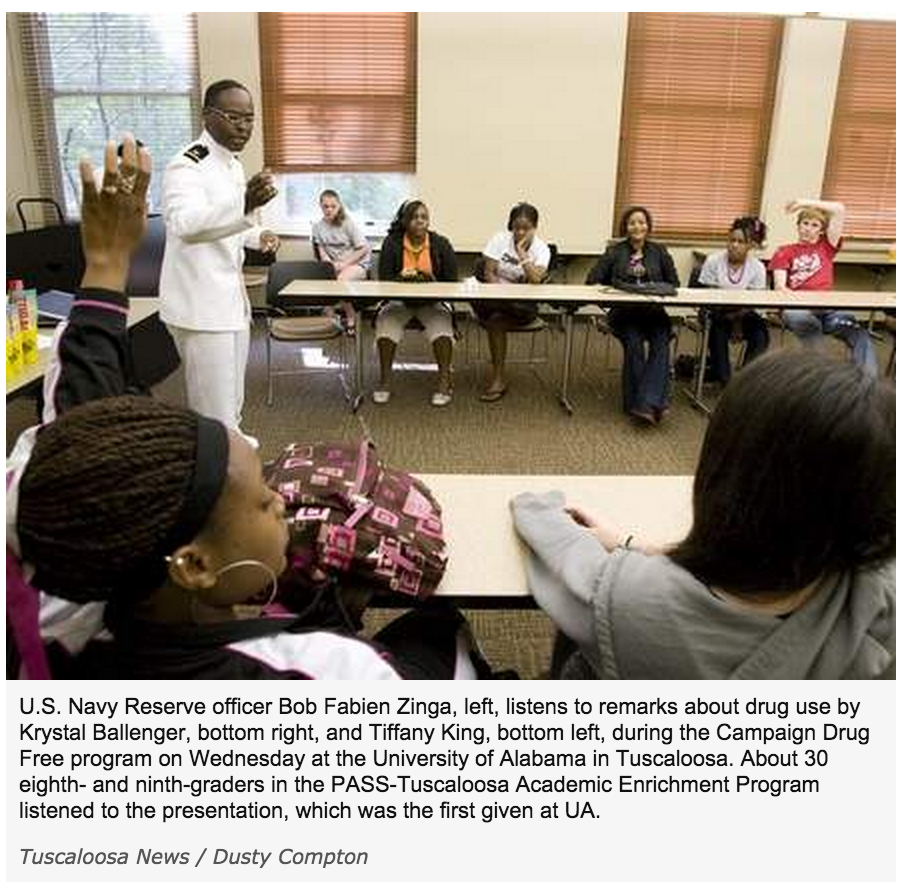 Raised in the Congo, Bob Fabien Zinga came to the United States to pursue freedom and educational opportunities. After earning a degree from the University of Alabama and joining the U.S. Navy Reserve, Zinga is now using the story of his journey for freedom to teach about a different type of freedom — freedom from drugs.

A little more than a year ago, Zinga and two other reservists started Tuscaloosa’s Campaign Drug Free, a free program by the U.S. Navy Reserve to teach elementary, middle and high school students how to say ‘no’ to drugs. Since then, the reservists have given several presentations to schools around Tuscaloosa.

On Wednesday morning, they gave their first presentation on the UA campus to a group of eighth- and ninth-graders from Holt High School who are participating in the PASS-Tuscaloosa Academic Enrichment Program. PASS is a three-week summer program that gives students the chance to finish their summer reading, improve math and writing skills and learn life lessons.

Their life lesson Wednesday, provided by Campaign Drug Free, was not just another lecture about the dangers of drug abuse — it encouraged the students to have the confidence to say “No.”

“It’s a positive thing,” said Tracey Hudson, a naval reservist with Campaign Drug Free. “You have all types of drug programs, but to see that someone in uniform can be drug-free teaches them to make positive choices.”

The program appeared to have the effect the reservists wanted.

“I learned to say ‘no’ to drugs,” Shanavlo Blair, a student, said afterward. “Drugs are bad for your health.”

The 45-minute program started with a video of “The Wizard of No,” teaching a teen how to say “no” to drugs. When the video ended, students yelled out what they learned.

“Young people do drugs because they don’t have high self-esteem,” said one student who wants to be a nurse.

Zinga told the students that they can do anything they set their mind to, but not if they do drugs.

related problems. Zinga and Hudson shared stories about their lives and the Navy Reserve.

Zinga explained in his French accent that being part of the Navy Reserve means he and Hudson are fighting for the students’ freedom, so he doesn’t want them to waste it with drugs.

“When you are approached with drugs,” he concluded with a laugh, “think about me with my funny accent saying ‘no’ to drugs.”